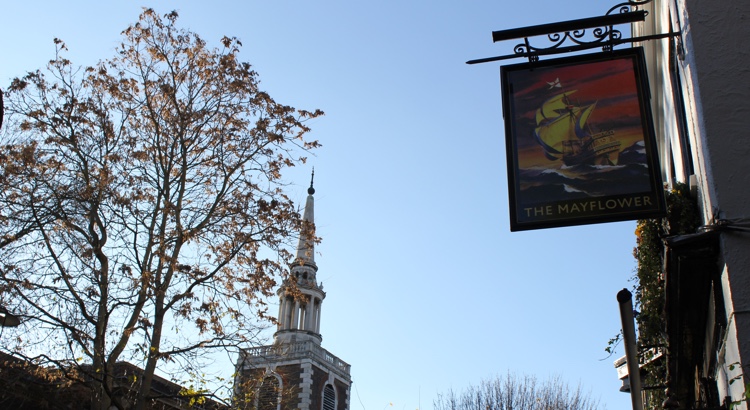 The trading ships of later centuries shaped the Rotherhithe community. The Mayflower must surely be the most famous vessel ever to have docked at Rotherhithe, which in 1620 took the Pilgrim Fathers, a group of Brownist separatists, on their historic journey to the New World of America. The pub (pictured above), ironically named the “The Spread Eagle”, was renamed the Mayflower Inn and its special role in the history of the USA is now marked by its unique licence to sell both American and British postage stamps.

A church named St Mary’s has stood at the heart of Rotherhithe since Saxon times, but it is in the grounds of the church building dating from “only” 1715 that visitors will find the remains of the Mayflower’s Captain Christopher Jones. Another ship is more prominent still, for the communion table is made of wood from the famous ninety eight gun warship the Temeraire. In Turner’s most evocative painting, it is shown on its final voyage to Beatson’s Yard, which was right next to King & Queen Wharf, to be broken up after a colourful fighting history that included the battle of Trafalgar.

One doesn’t need to be a heritage-buff to appreciate Rotherhithe’s other historic curiosities. Just beside The Mayflower Inn is the engine house which incorporated the pumps used during Marc and Isambard Brunel’s construction of the world’s first underwater tunnel (Thames Tunnel), which was started in 1825 and opened in 1843.

The site of King & Queen Wharf has in its time been a timber yard, bulk grain handling wharf, boat yard and the King & Queen stairs, from which it takes its name. Planning consent for King & Queen Wharf was originally given in 1987 by the Docklands Development Corporation with several variations to follow which resulted in 150 flats, parking for 300 cars (shared with Globe Wharf) and a swimming pool, sauna and Jacuzzi (also shared with Globe Wharf). K&QW was built by Fairclough Homes who had also purchased Globe Wharf but then sold Globe to Berkeley Homes. The Freehold of K&QW was purchased in 2010 and is now owned by over 100 K&QW Leaseholders.

Text adapted from a section of the original sales brochure, produced by Fairclough Homes